One of our clients had found an orange and white kitten. He seemed fine at first, but the next day, he just collapsed and they rushed him in to our hospital. Krystal, our receptionist, looked at the kitten and ran for me. The kitten, a little boy, about 6 weeks old, was unconscious and breathing rapidly. After a short discussion with the owners, we said we would do our best to save the kitten but we were very worried about his chances.

Technicians Vicki and Sam got warm towels, since hypothermia is a common problem in sick kittens, even on a warm day. The kitten’s temperature was 98.6, just a bit low for a kitten (normal: 99.5-102.5). A quick x-ray was taken which showed normal heart and lungs, and the kitten was placed in oxygen. Sam checked a blood sugar (low glucose is another common problem) but this was normal; Vicki placed an IV catheter in his tiny leg so we could start IV fluids. It seemed that dehydration was the most likely problem, although we were unsure why this happened so quickly when he’d seemed OK and had been eating before.

The kitten was barely responsive for hours; he was unable to swallow. A tube was passed which showed no obstruction in his throat. But, his gum color was a healthy pink, and none of us wanted to give up.

After the clinic closed for the day, I continued giving the kitten small amounts of IV fluids, rotating him (to avoid lung problems), and rubbing dextrose (glucose) on his gums. Finally, almost 10 hours after he came in, he was able to swallow some baby food. I felt like cheering (or crying!) when the kitten finally ate some dry kitten food on his own!

Flame after treatment for dehydration 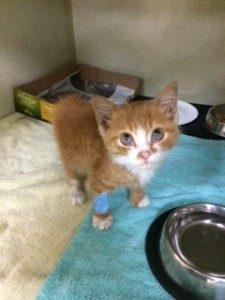 The next morning (really just a few hours later), the kitten was sitting up, purring, eating and looking like nothing ever happened. We are thankful that this little guy will be OK and will be able to join a very grateful family!

Update on Flame: we just saw him for his regular check-up and vaccinations, just 3 weeks after his scary first visit. He is doing great, just a normal kitten. He truly is a little miracle!